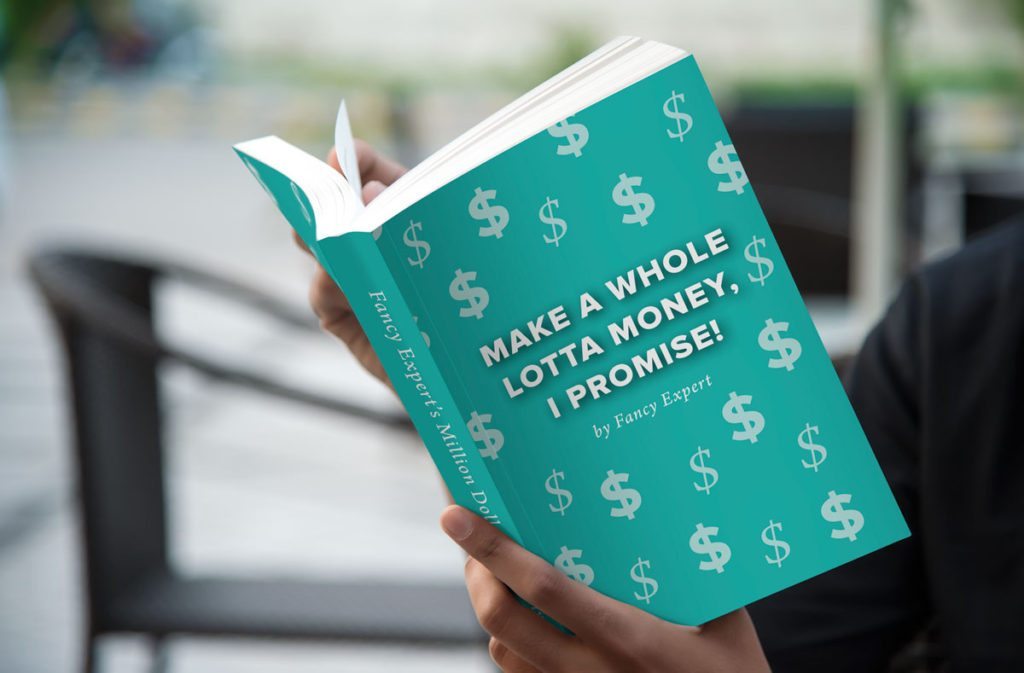 You have a million dollar idea. You just know it.

But you’re still about $999,999 away from your goal. That’s okay. You bought Fancy Expert’s “Make a Lotta Money, I Promise!” eCourse and you liquidated your savings to hire a coach who specializes in turning dreams into gold, Rumpelstiltskin style.

(You gotta spend money and/or give away your firstborn child to make money, right?)

Your Facebook friend (who looks pretty rich) swears by Magic Fingers email marketing, so you bought that, too. You’ll make back that $500/month as soon as your coach gives you the secret formula. And you heard through the grapevine that, if you launch a membership site, you can make money in your sleep, so you’re building one now. Fancy Expert did that 10 years ago and look at him today! That could be you. That will be you…just as soon as your website goes live.

Fast forward three months. You don’t have any clients, per se, but your new Social Media Magi swears that if you just re-tweet more, that’ll all change. You blog once a week. (Okay, that guy you hired on Outsource4Less blogs once a week, because successful people delegate.) And according to Fancy Expert, it’s only a matter of time before you go viral. Cha-ching!

Feeling the squeeze, you put up a squeeze page. After all, you’ve learned everything there is to know about making money online (Fancy Expert and Money Mentor told you so) and now you’re ready to share that knowledge with the world. You go to bed and sweetly dream of seven figures, knowing that you’re helping people just like you turn their dreams into gold.

That said, this isn’t it. What you just read is actually a scary story. It haunts the empty bank accounts of would-be millionaires just like you, dreams spun into fools gold by RumpelstiltsKoach and his cronies. It only feels like a fairy tale because we’ve heard it so many times.

Buy this course. Read this book. Do this retreat. And, you too, can win the Internet and live happily ever after.

If I had a dollar for every time I’ve heard, “I think I’m just going to put up a sales page because So and So’s million dollar program told me to,” I’d be a millionaire and I’d sell you the secrets on how to do it, too. Six months later I’d upsell you my follow-up package, “I Know You Haven’t Made Any Money Yet But Trust Me On This, It’s Going to Happen, Just Give Me $499/Month And Join My Private Facebook Community, Because You’re Worth It.” (Has a nice ring to it, don’t you think?)

This story also feels like a fairy tale because the ending is too good to be true. And, ultimately, because we want to believe it. We want so badly for Fancy Expert to fairy godfather our businesses into magical moneymaking machines. So we buy in and, in a heartbeat, the fairy tale turns into a scary story.

It’s scary how many people I meet who are clutching at straws, still believing they’ll turn into gold because they bought an eCourse that told them so. People who desperately want to believe that, with very little work and lots of money upfront, they, too, can earn the keys to the kingdom of fabulous eWealth.

So they come to me, as they believe their seven figure story is about to reach its apex, and ask me to build them a website to make it happen.

And, while I believe my sites sparkle, I don’t do magic. And neither does Fancy Expert or the Social Media Magi or RumpelstiltsKoach. The only spell for overnight success is many, many nights of hard work. Yours. No acclaimed eCourse, no bestselling book, no luxury retreat is going to do this work for you or show you a shortcut to fabulousness.

The true story doesn’t end. It certainly doesn’t end with “And she made seven figures in her sleep and lived happily ever after.”

I think it’s scary to truly commit to building a business today – no shortcuts, no magic – because we aren’t guaranteed that happy ending.

And we so badly want to believe in magic that we’ll try to buy our way to it, wasting precious time and money that we could be putting towards getting to know our ideal audience or crafting offerings that make peoples’ lives better.

Ultimately, it doesn’t hurt to believe in magic – as long as the magic you believe in is your own. Your story doesn’t have to be scary. You don’t have to sell your soul or trade your firstborn child to build your business. You just have to keep working your magic – with your clients, in your content, day after day, night after night. And then work it again. And again. Reflect, adjust, keep going. Fancy Experts will come and go, peddling their nuggets of wisdom. Sure, go ahead. Listen to what they have to say. But then go and do it your way. It’s the only way.